The Journey
TO GOING PRO

At just 25 years old, Christina Esposito’s knee has been through it all.

It all began her freshman year of college. She was at the top of her lacrosse game and earned a spot on Northwestern University’s starting line-up as an attacker. She was practicing with her teammates before a game day when she suddenly felt (and heard) multiple pops in her left knee. In a split second, she had torn her lateral and medial meniscus, ACL and MCL, and suffered from an LCL sprain and multiple bone contusions.

“Coming back from that was hard, but I was motivated to get back to playing,” Christina said. “They gave me a brace to wear after surgery [from another company], and it was the most uncomfortable brace I had ever worn. I worked so hard not to wear that brace because it was so awful.” 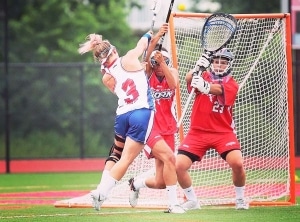 Over the next few years, Christina’s knee continued to give her problems; she had another ACL tear, complete loss of her meniscus, and experienced problems with the hardware used in her knee’s reconstruction surgery due to a contact injury.

Christina’s athletic trainer suggested she try another brace after her third surgery, and she reluctantly agreed. The new brace worked better than the first brace, but it still wasn’t the right solution for her. Her trainer then fit her with an offloading brace, and this time, she could feel the difference. The Breg Compact X2K® CounterForce helped her in ways she didn’t think were possible. Not only was the brace comfortable to wear, but it enabled her to return to playing lacrosse.

“The compression on the sides of the brace is really helpful, and I actually felt no pain once I started wearing it. I can’t do anything on the athletic level without the brace. The brace is my armor, and I feel like I can do anything with it on. It’s the reason I can still play professionally.”
Christina Esposito, Professional Lacrosse Player