Running Out of Options

At only 45 years old, Angela Tolan was facing the onset of a disease that is commonly thought to affect only older patients: osteoarthritis. An avid exerciser, she was wrestling with the idea of slowing down while friends and peers the same age continued the activities they loved without a second thought.

Angela’s doctor prescribed anti-inflammatories for a year, which worked well enough, but the medication wasn’t intended for long-term use. When she was switched to cortisone shots, the results made her hopeful, until they wore off and she was left with more pain than before. She was running out of options. 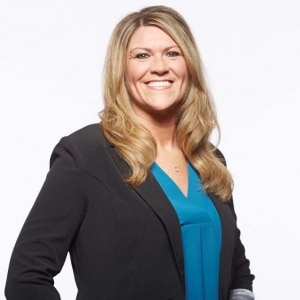 “I was so frustrated because there were activities I just could not do,” she said. “I thought, ‘I’m only 45, I don’t want to have to pick and choose!’”

She cried at the doctor’s office. Exercise wasn’t just a hobby, it was also an important outlet. As a school counselor at a junior high, she needed her workouts to relieve stress and maintain her mental health.

So her doctor proposed another course of treatment: a new anti-inflammatory, coupled with Breg’s Quantum® OA. The knee brace was designed to apply a force that relieves bone-on-bone friction when the knee is fully extended but gradually reduce force as it bends so it is more comfortable when a patient is sitting.

At first, she wasn’t thrilled with the idea. She had worn ACL braces in the past that were heavy and bulky, with big hinges that knocked into her opposite knee. Then she tried on Quantum.

“It was really low profile, and I loved that it was lightweight but still provided a lot of stability.”
Angela Tolan

Getting the brace was easy, too – a representative from Breg fit the brace in less than 15 minutes and taught her how to take it on and off without making any adjustments. A few months later, when she’d lost weight, Angela was able to tighten the straps herself, saving a trip to the doctor. She wore the brace all day, every day and noticed a big difference at work.

“Prior to having the brace, my leg was so swollen and painful. I wasn’t sleeping well, and it was always uncomfortable. I caught myself constantly rubbing it,” she said. It made her irritable around students. “That stopped when I started wearing the brace.”

She noticed an even bigger change in the gym.

“When I used to do squats, they were hard and painful, and I could hear a squeaking noise. After fitness classes, I was stiff and sore,” she said. “Now, when I do side-to-side movements, I’m not afraid of slipping or sliding.”

Angela believes that wearing the brace reduced the painful swelling she experienced throughout the day, so that now she only has to wear the brace when she’s active. It’s renewed her hope that she doesn’t have to give up the things she enjoys.

“I’ve been able to continue the exercises I love, and I’m in a much better spot,” she said.

For the Love of Golf