For the Love of Golf

Todd Vangerpen is one of 14 million Americans living with osteoarthritis. At 60 years old, he was at the top of his game in the airline industry and hitting his stride on the golf course as well. There was just one problem – it was becoming increasingly difficult to walk all 18 holes due to significant knee pain.

Todd and his doctor decided it was too early for total knee replacement, so they opted for more conservative treatment, starting with the Quantum® OA knee brace. It dynamically unloads as the knee straightens, so patients get the most support when their pain is greatest.

“I had almost immediate relief. It brought me back into proper alignment and evenly distributed the pressure. It was a life-changer at that point. And it has continued to perform.”
– Todd Vangerpen, avid golfer 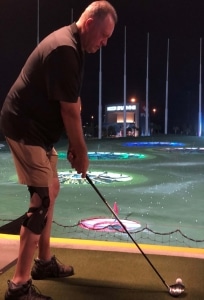 Todd said his pain went away, and he can wear the brace all day because it is so comfortable.

“In a seated position there is no force at all, but when I stand I can feel it working,” he said. “I don’t have that constricted feeling I get with an elastic brace, either.”

He says he has more confidence going up and down steps, a movement that left him feeling unstable before he tried Quantum. And he’s also gained confidence in the health care system.

“I’ve spent 20 years in the airline business delivering high-level service, and healthcare is the ultimate opportunity for improving customer care,” Todd said. “When a solution like yours comes with a rep like [Jeff Padilla] and all his product knowledge, that’s an amazing package.”

“Hearing from Todd now that he’s been using the brace for a while and knowing how life changing it has been for him makes me excited to go to work every day and share products that enrich people’s lives,” Jeff said.

For the Love of the Game

Running Out of Options
Scroll to top